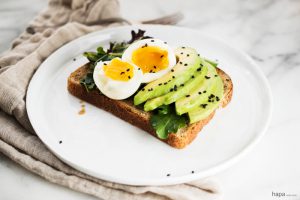 Pre- war days, we mostly had cooked breakfast such as kippers, bacon or eggs with the option of bread, or porridge with milk and butter. Old fashioned Scottish porridge was made in big batches, you even take a slice with you. Such breakfasts gave lasting fuel to those with physical jobs.
After the second world war, cereals became popular again due to surplus cereals such as maze and corn, and manufacturers started predominantly targeting children in their advertisements with toys. When not targeting children, manufacturers want to convince us that cereals are healthy by using words like ‘wholegrain’ and ‘low fat’, however even so called healthy granolas are made with highly baked carbohydrate which is once eaten, is converted to glucose. This unbalances blood sugar leaving you hungry after just a couple of hours. Some ‘frosted’ or chocolate cereals / granolas have up to 50% of ingredients consisting of sugar!
Those trying to lose weight or be healthy may think that fruit smoothies are a good idea. Whilst these are high in vitamins and contain some fibre, too much fructose in one go can also spike blood sugar and not keep you full. The best smoothies contain protein and fat such as nut butter or ground seeds. For example – smoothie with banana, dessertspoon almond nut butter or half avocado, full fat milk or dairy free milk, cocoa powder.
What about low fat yoghurt ?
Reduced fat yoghurt is much higher in the milk sugar (due to the absence of fat) and fruit flavoured yoghurts have added sugar too, so this is not ideal. The best way to eat yoghurt for breakfast is to have natural full fat ‘live’ yoghurt (this means it has good bacteria in it) with added fresh fruit and a dessertspoon of seeds or chopped nuts to fill you up. For those on a dairy free diet there are now good coconut milk based yoghurts.

The best breakfast consists of some protein and/ or fat, and ideally some veggies, which leads to slow release energy which keeps you fuller for longer. See some tasty healthy ideas below:

Gluten free or wholemeal toast with almond nut butter and banana
Gluten free or wholemeal toast with half mashed avocado, lemon juice and tomato plus few pumpkin seeds
Eggs, smoked salmon and avocado
Full fat yoghurt or coconut milk yoghurt with dessert spoon of pumpkin seeds, handful of berries, chopped nuts, grated apple and tablespoon of oats
Deli breakfast: tomatoes, olives, cucumber, with smoked fish or cold meat and eggs
Poached egg with wilted spinach and half avocado few pumpkin seeds
Cottage cheese with slices tomato and avocado and seeds
Egg and banana pancake (just made with mashed banana and whisked eggs – delicious)
Quality sausages or meatballs with spinach, tomatoes and mushrooms
2 egg Omelette with feta, mushrooms and tomatoes with watercress
2 poached egg with asparagus and tomatoes
Left overs from the dinner the night before! Breakfast can consist of any food and doesn’t have to be typical.

What if you aren’t hungry in the morning?
Some people aren’t hungry at all because they have eaten too much too late the night before and are still digesting their main meal.
If you aren’t hungry and are able to defer breakfast, take something with you to eat mid morning. If you have no appetite because you ate late, either eat earlier the night before or skip breakfast. However most people who skip breakfast will reach for a snack mid to late morning and this can often be biscuits or sweets. If you are tempted to skip breakfast then at least take a few natural nuts and fruit with you.
Intermittent fasting
Eating within an eight hour window (skipping breakfast and just eating lunch and dinner) can be flexible and convenient, and studies suggest that it may increase weight loss, improve blood sugar levels (especially for those eating the wrong breakfast), enhance brain function and extend longevity. However for some people restricting food for long periods may cause weakness, hunger, increased food consumption or blood sugar problems (in susceptible people) and weight gain.
Find out more www.whatseatingyou.co.uk