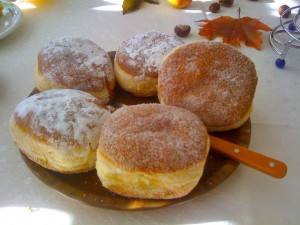 There was a fascinating programme on Horizon recently – “The Truth About Fat” – which discussed research into the appetite hormones Grehlin and PYY (Peptite YY).  These hormones have a major impact on what we eat, when we eat, how much we eat and when to stop.

Grehlin our appetite hormone, should rise immediately preceding a meal and decline sharply following the meal, but it appears that with some obese people it is constantly switched on, whereas slimmer people seem to get a quicker but more intense boost of this hormone only at mealtimes, as well as having higher levels of PYY (appetite regulator).

The programme explained how much these amino acid peptides influence the brain on our food choices. An experiment on willpower versus hormones from the programme also showed that when we have to go without food longer than is comfortable, or restrict calories, Grehlin is increased and our appetite rises, causing our brain to choose more sugary fatty food.  It was  demonstrated  that more sugary, fatty food is eaten than if we ate regularly – typically 170 calories more ! This goes to show that low calorie diets or trying to skip meals in order to lose weight is actually going make selecting healthy food harder.

They also looked at very special sets of identical twins, where despite sharing the same genes, one of them had gone on to increase in weight more than the other.  Interestingly it would appear that the only difference between them, was that one of them had experienced more stress, and it was this that switched on their appetite gene.

Fortunately it was also shown that this is not set in stone and can be reversed again.

The programme also focused on people who had resorted to gastric band surgery because they couldn’t control their appetite.  These people noticed afterwards that not only was their stomach smaller but their new feelings of fullness reset their appetite hormones resulting in lower Grehlin levels and less choices for sugary fatty food.

I have noticed with the people I see that stress does lead to comfort eating, but is this as a result of the changes to our appetite hormones that stress brings about?

This challenges the perception that some people have that obese people should have more willpower, and it serves to remind us yet again of the negative impact of stress, not only on how we feel, but also how we look.