Went to El Sabio in Newbury last night with my lovely friends Annie, Dave and Caz. 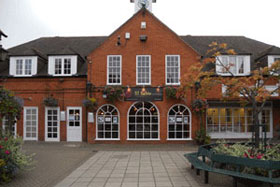 Luckily we parked next door so weren’t too windswept by the horrendous weather. We’d been given an early slot as they had several large parties in later, so we arrived to an almost empty restaurant.  The restaurant was cold, both in temperature and atmosphere and the lighting too bright, however we were given a great welcome by the staff. 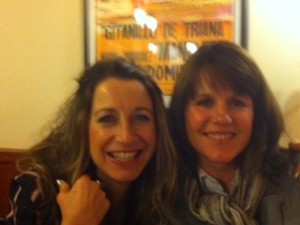 A bottle of Rose and a dish of citrus olives kicked off the evening.  Our waitress was really friendly and helpful and suggested a platter to start, so we opted for the meat choice with choritzo, salami, parma ham and Marengo cheese (wish there had been more cheese it was yum), along with tomato bruchettas which arrived promptly and was as you would expect a meat platter to be – no surprises.

By this time the place was filling up and is definitely popular.  We all ordered a couple of Tapas dishes each and another bottle of Rose.  I went for the giant prawns in olive oil, nice and fresh but swimming in oil, plus octopus in paprika which was tender and tasty.  I added on a side salad which I didn’t really need and came without any dressing. 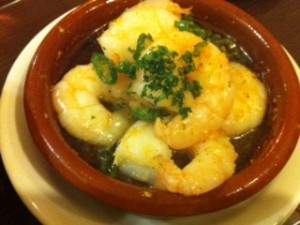 Annie’s looked good, she had opted for fried baby squid with aloi and chicken and chorizo skewers. 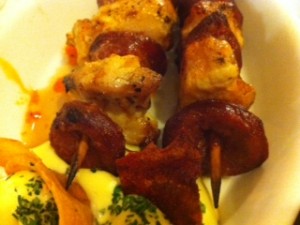 We rounded off the meal with some dessert Tapas which were one bite tasters.  I had white chocolate cheesecake, Annie had banoffee cream, Caz had apricot tart – dried out apparently, and Dave had piped chocolate.  The cream seemed to dominate most of them but the piped chocolate was nice enough.

We all agreed that the beauty of Tapas in Spain, is having one or two Tapas with a drink.  In the UK we tend to order all our Tapas in one go, and I felt a bit swamped and got full very quickly.    I think Tapas bars in this country should be more like the Spanish ones; tons of atmosphere, some lovely drinks and a range of tapas that you order one at a time over the course of the evening.  Maybe we should have done it like that!

The food was as I expected for a chain restaurant, nice in parts but not “wow”.  The staff made up for the bland decor and were very attentive despite having some very large parties in.  Our bill came to £112, so £30 each for food and plenty of drink didn’t seem too bad.

Apparently they have Flamenco evenings on a Thursday, which wouldn’t go amiss on a Saturday either.  I wouldn’t go again, unless I popped in for one dish and a glass of wine as a snack on a sunny Saturday afternoon, and as always it’s the company that make the evening! 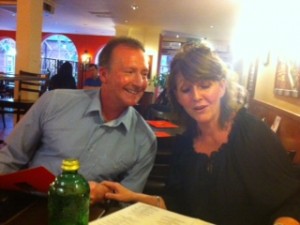